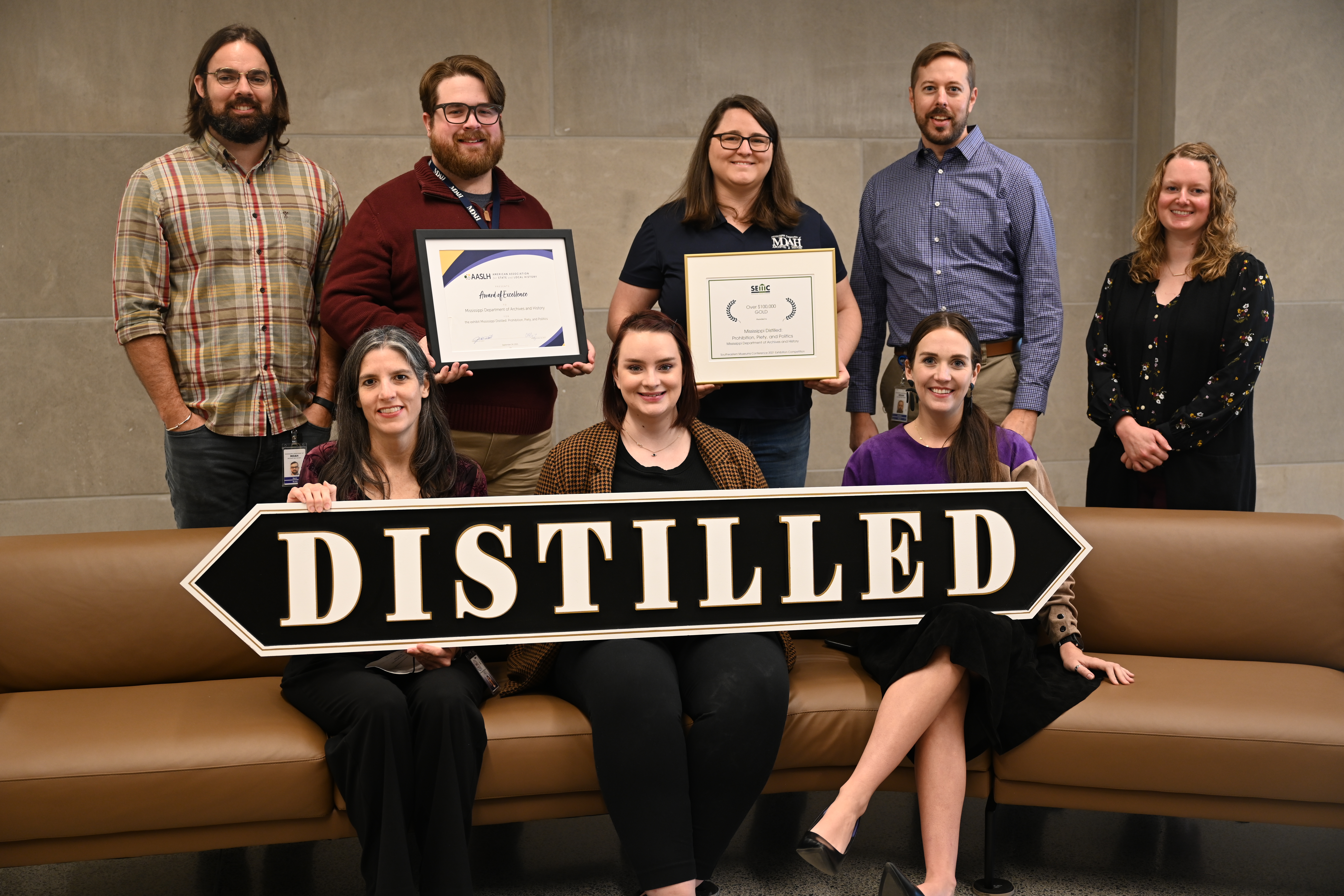 MDAH received the Southeastern Museums Conference's Gold Award for its recent exhibition Mississippi Distilled: Prohibition, Piety, and Politics. The Gold Award was presented in the over $100,000 budget category and recognizes museums that showcase exhibitions of merit that are well designed, have educational value, and treat the objects with care and respect. Exhibitions were judged by an appointed jury of museum professionals across the region who specialize in  curatorial studies and exhibition design.

Mississippi Distilled was an immersive exhibit that explored the state’s tumultuous relationship with alcohol from the colonial period to today. It featured fascinating artifacts, enticing stories, and surprising images that took visitors on a journey. The exhibition ran from July 7, 2020, through June 26, 2021.

Award winners were celebrated at SEMC's 2021 annual meeting in Chattanooga, Tennessee. MDAH staff members pictured above are, on the front row (from left) Nan Prince, Jessica O'Connor, and Madeleine Miller; and, on the back row (from left), Sam Butz, Tony Schnadelbach, Barbara McClendon, Shane Keil, and Megan Bankston.

The American Association for State and Local History (AASLH) has awarded the Mississippi Department of Archives and History (MDAH) its Award of Excellence for the Mississippi Distilled: Prohibition, Piety, and Politics special exhibit at the Two Mississippi Museums. The AASLH Leadership in History Awards is the most prestigious recognition for achievement in the preservation and interpretation of state and local history. The exhibit runs through Saturday, June 26, 2021.

Mississippi Distilled: Prohibition, Piety, and Politics is an immersive exhibition exploring the state’s tumultuous relationship with alcohol from the colonial period to today. It features fascinating artifacts, enticing stories, and surprising images that take visitors on a journey that begins with ancient alcohols and the science of spirits through the social problems that led to the upheaval of the temperance movement and its impact on voting rights, lynchings, child labor laws, and domestic violence.

After the widespread use of alcohol during early statehood, Mississippians began to fight against alcohol and the social problems it helped fuel. The stories of Carrie Belle Kearney and Bishop C. B. Galloway explore the complex motivations behind temperance.

Mississippi Distilled closes with local option elections that keep Prohibition alive in many Mississippi counties. Stories of the alcohol industry—including some of the state’s oldest breweries, distilleries, and distribution companies—round out the exhibition. Visitors are invited to share their own memories of a dry Mississippi.

The AASLH awards program was initiated in 1945 to establish and encourage standards of excellence in the collection, preservation, and interpretation of state and local history throughout the United States. The AASLH Leadership in History Awards not only honor significant achievement in the field of state and local history, but also bring public recognition of the opportunities for small and large organizations, institutions, and programs to make contributions in this arena. For more information about the Leadership in History Awards, or go to www.aaslh.org.

The exhibit runs through Saturday, June 26, 2021, in the FedEx and Medgar and Myrlie Evers Exhibition Halls at the Two Mississippi Museums and is made possible with the support of Southern Beverage Company, Inc.

Ticket prices for Mississippi Distilled are $15 for adults and $8 for children and include admission to the Museum of Mississippi History and the Mississippi Civil Rights Museum. Discounts are available for children under three, students, seniors, active duty and military veterans, and groups of ten or more. Museum hours are Tuesday through Saturday from 9 a.m. to 5 p.m., and Sunday from 1 to 5 p.m. Admission to the museums is free on Sundays.

Join us for the June edition of the Summer Music Series with blues musician and muralist Bobby Whalen. He will perform songs that recall the juke joints, stills, and casinos highlighted our exhibition, Mississippi Distilled: Prohibition, Piety, and Politics at the Two Mississippi Museums. The Mississippi Distilled special exhibit will end on Saturday, June 26. Admission to the Museum of Mississippi History and Mississippi Civil Rights Museum is free every Sunday. Face masks and social distancing guidelines are required.

Join us for an evening of Prohibition-era cocktail tasting at the Two Mississippi Museums. Guests will learn the histories of cocktails featured in the Mississippi Distilled: Prohibition, Piety, and Politics special exhibit and view cocktail demonstrations presented by certified Jackson bartender Jimmy Quinn. Refreshments will be provided by award-winning chef Nick Wallace. Tickets are $15 per person and space is limited. Face masks and social distancing guidelines are required.

Join us for a new music series at the Two Mississippi Museums! Dance your afternoon away on Sunday, May 16, at 1 p.m. with live music performed by "Bluesman" McKinney Williams featuring the original songs of juke joints and other illicit drinking establishments of the Prohibition-era highlighted in the Mississippi Distilled: Prohibition, Piety, and Politics special exhibit. Admission to the Museum of Mississippi History and Mississippi Civil Rights Museum is free every Sunday. Face masks and social distancing guidelines are required.

Many Stories: Votes for Women: The Southern Story

Learn about the story of the women's suffrage movement in Mississippi with special guest Marjorie J. Spruill, Distinguished Professor Emerita of the University of South Carolina, as we honor Women's History Month in this edition of the #ManyStories Series. Spruill will discuss the legacies of Reconstruction, reforms of the Progressive Era, and the white supremacist attitudes of Mississippi's early suffragettes such as Nellie Nugent Somerville and Carrie Belle Kearney.

“We are thankful to Nissan for their continued generosity and support,” said Katie Blount, director of the Mississippi Department of Archives and History. “We will provide a safe experience for all visitors that take advantage of this opportunity to explore the museums.”

In a continuing effort to stem the spread of COVID-19, visitors will be required to wear masks, which will be available on site. All the public spaces have been sanitized, and thorough cleaning will continue every day. Staff will be on site to ensure that social distancing guidelines are maintained. A limited number of visitors will be allowed inside at one time. Visitors are encouraged to purchase their tickets online at tickets.mdah.ms.gov.

“Nissan believes that education promotes conversations, conversations enable understanding, and understanding builds community. Building respect and greater civic spirit within our communities is needed now more than ever, “said Parul Bajaj, senior manager, Philanthropy, Nissan North America, Inc. “We are honored to welcome our neighbors across Mississippi to the museums on July 18.”

Since opening its doors in 2003, Nissan’s assembly plant in Canton, Mississippi has donated more than $15 million and worked more than 8,000 volunteer hours to support 200 nonprofit organizations in the Great Jackson area. The facility employs nearly 6,000 employees who build the Nissan Altima, Murano, Frontier, TITAN and TITAN XD, NV Cargo and NV Passenger vehicles.

The museums will be open from 9 a.m. to 4 p.m. on July 18. They are located at 222 North Street in Jackson. For more information email info@mdah.ms.gov.

“We are excited to reopen our museums and welcome the public at this historic moment. As our nation deals with COVID-19, economic hardship, and the legacy of racial injustice, MDAH has an ever more important role to play,” said Reuben Anderson, president of the MDAH Board of Trustees. “Our archives and museums document and teach about epidemics, recessions, and other crises in our past that we have overcome together. They also teach about the history of racial injustice in America from the days of slavery through the Civil Rights Movement.”

Anderson continued, “By helping build a shared understanding of our history, we are strengthening our resolve, uniting our people, and paving the way for a brighter future together.”

In a continuing effort to stem the spread of COVID-19, each site will limit the number of visitors inside. Visitors will be required to wear masks, and masks will be available on site. All the public spaces have been sanitized, and thorough cleaning will continue every day. Staff will be on site to ensure that social distancing guidelines are maintained. Visitors are encouraged to purchase their tickets online to the Eudora Welty House & Garden, Museum of Mississippi History, and Mississippi Civil Rights Museum.

“We are especially eager to welcome visitors to our brand new exhibit at the Two Mississippi Museums—Mississippi Distilled—which explores our state’s tumultuous relationship with alcohol,” said MDAH director Katie Blount. “As soon as it is safe to gather in larger numbers, we will celebrate this exhibit with a series of public events.”

The popular Wednesday noon lecture series History Is Lunch continues online—viewers will find the programs on the MDAH Facebook page.