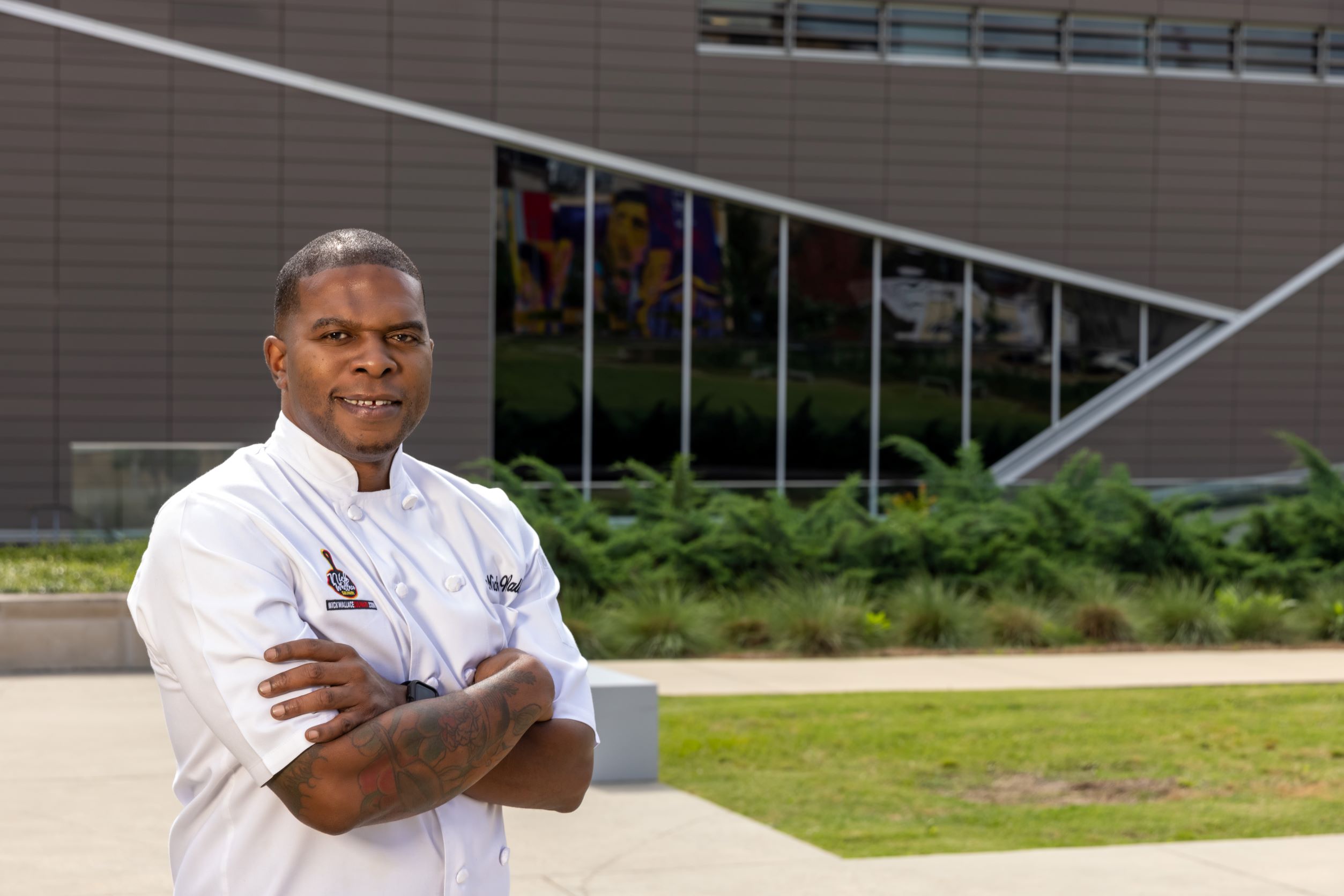 The new Nissan Café by Nick Wallace Culinary is now open at the Two Mississippi Museums. Spearheaded by executive chef Nick Wallace, the new café offers a wide assortment of Southern and French inspired cuisine to museum visitors during breakfast and lunch hours Tuesdays through Sundays in the Nancy and Ray Neilsen Hall of History.

“We are excited to have Nick Wallace Culinary at the Two Mississippi Museums,” said Katie Blount, MDAH director. “Chef Wallace has a commitment to healthy, fresh food that is inspired by history and flavors of the South. He also brings welcome energy, vision, and new ideas. But most importantly, he’s a great cook, and we love his food."

A native of Edwards, signature chef Nick Wallace acquired his culinary talents from his grandmothers, Lennel Donald and Queen Morris, who both practiced Southern home- cooking with farm-rooted family recipes. Named Mississippi’s Best Chef of 2020 and a member of the Best Chefs America, Wallace is renowned for his Mississippi-fashioned “farm to table” cooking method using garden-fresh locally grown produce and made- from-scratch ingredients in his cuisine blended with a unique classical French style. He has been featured on several international culinary competitions on the Cooking Channel and Food Network and won the Food Network’s Chopped: Alton’s Challenge in 2017 and their Fire Masters television series title in April 2021. He has also been published in cultural and culinary magazines such as Southern Living.

Chef Wallace served as a chef at the James Beard House in New York City and previously served as the executive chef at the King Edward Hotel and Mississippi Museum of Art in downtown Jackson. In addition to his restaurant business Nick Wallace Culinary, Wallace also operates his non-profit organization Creativity Kitchen, which provides healthier food selections for students in Jackson Public Schools and assists with other charity ministries in the community through food partnerships and cooking workshops.

Children and parents are invited to the R.E.A.D. (Read, Engage, and Discover) summer enrichment program at the Two Mississippi Museums on Friday, July 30, at 11 a.m. This final edition will feature local hip hop artist Dear Silas reading Michael Mahin’s Muddy: The Story of Blues Legend Muddy Waters. Children will engage in a hands-on activity following the reading. This event is free and will be held in the Craig H. Neilsen Auditorium. Face masks and social distancing guidelines are required. 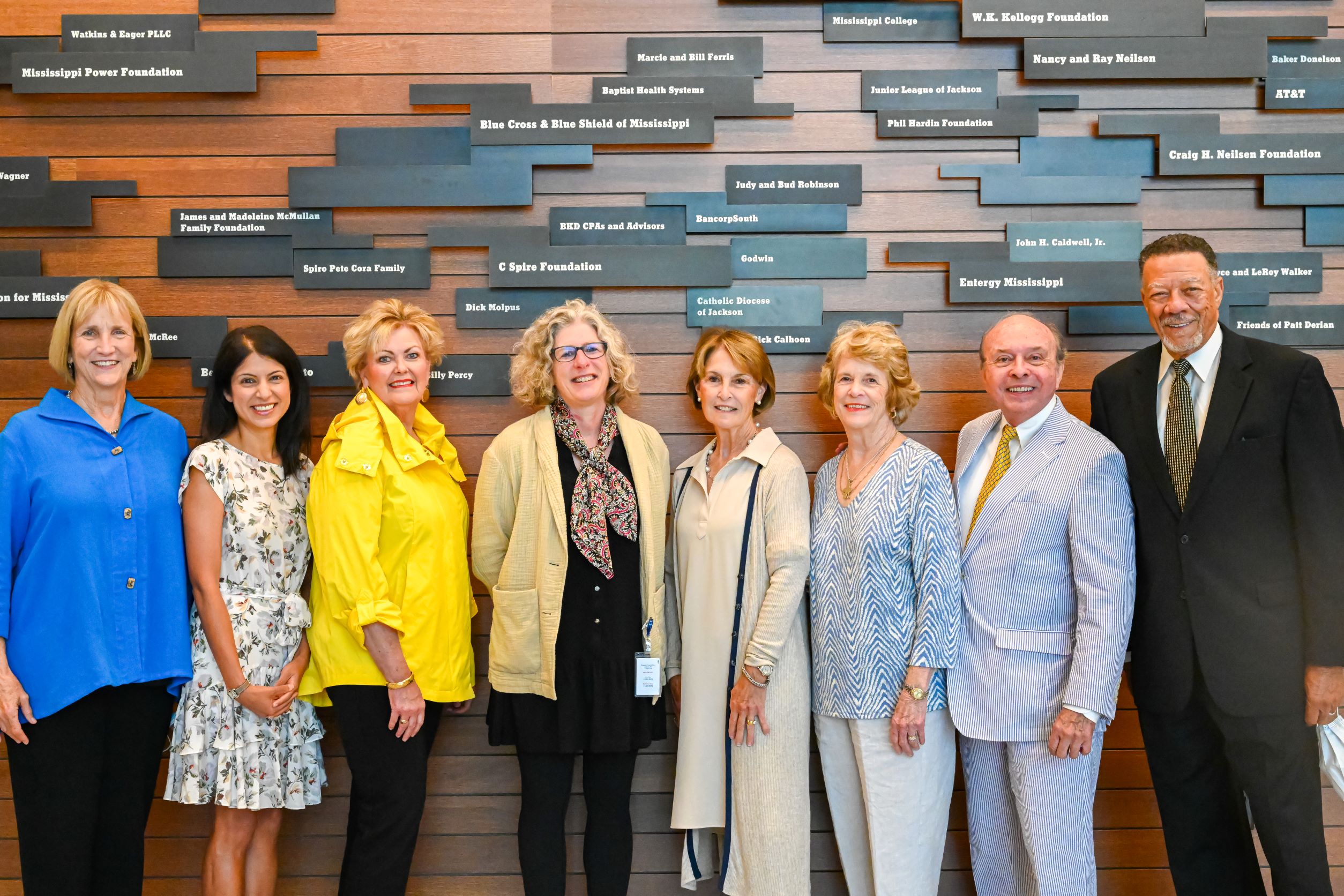 The Nissan Foundation has donated $30,000 to the Mississippi Department of Archives and History (MDAH) to underwrite field trips to the Museum of Mississippi History and Mississippi Civil Rights Museum for the upcoming school year.

"We are grateful to the Nissan Foundation for their support of our field trip program,” said Katie Blount, director of MDAH. “School children are the most important people we serve. The foundation’s generosity will help us reach our goal for every student in the state to visit the Two Mississippi Museums at least once.”

“For nearly 30 years, the Nissan Foundation has been committed to amplifying the efforts of nonprofit organizations doing the important work of sharing diverse cultural perspectives and experiences with communities across the country,” said Parul Bajaj, senior manager, Nissan Philanthropy. “At perhaps no other time in recent history has the work of Two Mississippi Museums been so critical. We are proud to support their efforts to inspire people to embrace the value of our differences.”

The funds will be used to defray costs such as admission, travel, and on-site lunches for students. To reserve or learn more about field trips at the Two Mississippi Museums, contact Stephanie King, field trips coordinator, at sking@mdah.ms.gov.

Two Mississippi Museums hours are Tuesday-Saturday 9 a.m.–5 p.m. The museums are open free of charge on Sundays from 11 a.m.–5 p.m. and are located at 222 North Street in Jackson. For more information email info@mdah.ms.gov.

Since opening its doors in 2003, Nissan’s assembly plant in Canton, Mississippi, has donated more than $18 million and worked more than 12,000 volunteer hours to support more than 200 nonprofit organizations in the Greater Jackson area. The facility employs more than 5,500 people who build the Nissan Altima, Frontier, TITAN and TITAN XD, NV Cargo and NV Passenger vehicles.

In honor of civil rights icon Medgar Evers’s birthday, admission to the Mississippi Civil Rights Museum and Museum of Mississippi History will be free on Friday, July 2. Admission will include the special exhibit, I AM A MAN: Civil Rights Photographs in the American South, 1960–1970. Museum staff will highlight Evers’s life and legacy through guided tours at 11 a.m. and 2 p.m. Face masks and social distancing guidelines are required.

Join us for the final edition of our Summer Music Series program on Sunday, July 11, at 1 p.m., featuring the smooth jazz sounds of saxophonist Jessie Primer III. Admission to the Museum of Mississippi History and Mississippi Civil Rights Museum is free every Sunday. Face masks and social distancing guidelines are required.

Children and parents are invited to the R.E.A.D. (Read, Engage, and Discover) summer enrichment program at the Two Mississippi Museums on Friday, June 25, at 11 a.m. In this edition, editorial cartoonist Marshall Ramsey will join us for a reading and discussion of his children’s book, Banjo’s Dream: A Little Brown Dog’s A-Z Book of Inspiration. Children will engage in a hands-on activity following the reading. This event is free and will be held in the Craig H. Neilsen Auditorium. Face masks and social distancing guidelines are required.

The American Association for State and Local History (AASLH) has awarded the Mississippi Department of Archives and History (MDAH) its Award of Excellence for the Mississippi Distilled: Prohibition, Piety, and Politics special exhibit at the Two Mississippi Museums. The AASLH Leadership in History Awards is the most prestigious recognition for achievement in the preservation and interpretation of state and local history. The exhibit runs through Saturday, June 26, 2021.

Mississippi Distilled: Prohibition, Piety, and Politics is an immersive exhibition exploring the state’s tumultuous relationship with alcohol from the colonial period to today. It features fascinating artifacts, enticing stories, and surprising images that take visitors on a journey that begins with ancient alcohols and the science of spirits through the social problems that led to the upheaval of the temperance movement and its impact on voting rights, lynchings, child labor laws, and domestic violence.

After the widespread use of alcohol during early statehood, Mississippians began to fight against alcohol and the social problems it helped fuel. The stories of Carrie Belle Kearney and Bishop C. B. Galloway explore the complex motivations behind temperance.

Mississippi Distilled closes with local option elections that keep Prohibition alive in many Mississippi counties. Stories of the alcohol industry—including some of the state’s oldest breweries, distilleries, and distribution companies—round out the exhibition. Visitors are invited to share their own memories of a dry Mississippi.

The AASLH awards program was initiated in 1945 to establish and encourage standards of excellence in the collection, preservation, and interpretation of state and local history throughout the United States. The AASLH Leadership in History Awards not only honor significant achievement in the field of state and local history, but also bring public recognition of the opportunities for small and large organizations, institutions, and programs to make contributions in this arena. For more information about the Leadership in History Awards, or go to www.aaslh.org.

The exhibit runs through Saturday, June 26, 2021, in the FedEx and Medgar and Myrlie Evers Exhibition Halls at the Two Mississippi Museums and is made possible with the support of Southern Beverage Company, Inc.

Ticket prices for Mississippi Distilled are $15 for adults and $8 for children and include admission to the Museum of Mississippi History and the Mississippi Civil Rights Museum. Discounts are available for children under three, students, seniors, active duty and military veterans, and groups of ten or more. Museum hours are Tuesday through Saturday from 9 a.m. to 5 p.m., and Sunday from 1 to 5 p.m. Admission to the museums is free on Sundays.

Join us for the June edition of the Summer Music Series with blues musician and muralist Bobby Whalen. He will perform songs that recall the juke joints, stills, and casinos highlighted our exhibition, Mississippi Distilled: Prohibition, Piety, and Politics at the Two Mississippi Museums. The Mississippi Distilled special exhibit will end on Saturday, June 26. Admission to the Museum of Mississippi History and Mississippi Civil Rights Museum is free every Sunday. Face masks and social distancing guidelines are required.

Explore the fabled history of the Free State of Jones in this edition of the #ManyStories Series at the Two Mississippi Museums on Thursday, June 3, at 6 p.m.

Join us for an evening of Prohibition-era cocktail tasting at the Two Mississippi Museums. Guests will learn the histories of cocktails featured in the Mississippi Distilled: Prohibition, Piety, and Politics special exhibit and view cocktail demonstrations presented by certified Jackson bartender Jimmy Quinn. Refreshments will be provided by award-winning chef Nick Wallace. Tickets are $15 per person and space is limited. Face masks and social distancing guidelines are required.