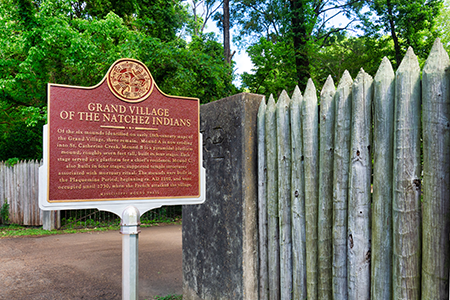 Have you stood on the grounds of the Grand Village of the Natchez Indians and wondered what the site might have looked like hundreds of years ago? A new application developed by the Mississippi Department of Archives and History (MDAH) and TimeLooper lets viewers virtually experience the Grand Village as it appeared in 1730.

“There are many exciting developments ongoing at the Grand Village,” said Lance Harris, director of the Grand Village of the Natchez Indians.  “From recent archival and archaeological research, we will be able to expand the interpretation of the site in ways never imagined before. I am excited that we will be able to share the history and culture of the Natchez people in this state-of-the-art experience.”

Structures in the virtual reality experience were created using archaeological findings and descriptions written by French colonists who observed the Natchez ceremonial mound site when it was occupied. The free TimeLooper app, available on Apple or Google allows viewers to see a representation of the home of the Great Sun, the hereditary chief of the Natchez, which the French described as the largest house in the Grand Village.

The application shows the Temple Mound, the sacred place where the Natchez leaders conducted important ceremonies and people brought offerings of food to honor their ancestors. Viewers can also see the large wooden birds that topped the roof of the temple, which French colonists described in their accounts.

Information about the 1729–¬1730 Natchez war with the French, the Old Temple Mound, other Natchez structures, and the ceremonies that took place on the central plaza are also featured in the application.

This experience is available to users at no cost. The TimeLooper app is available on the Apple App Store and Google Play.

“This application presents us with a fresh way to share the important story of the Natchez Indians with more people around the world,” said MDAH director Katie Blount. “I am thankful for the good work of our staff and TimeLooper for creating this free and accessible product.”

“We were thrilled to collaborate with MDAH to transport people back to 1730 and enable users to visualize the scale and beauty of Village community,” said Andrew Feinberg, a Principal and Founder of TimeLooper. “It has been wonderful to see MDAH take the lead in enhancing the immersion and accessibility of the Grand Village site, particularly in these challenging times when visiting historic sites is problematic.”

TimeLooper is an experiential design firm serving public lands, historic sites, museums, and educational institutions. TimeLooper’s goal is to bring history and science to life through the development and deployment of immersive and interactive experiences that not only teach, but inspire. TimeLooper is dedicated to enhancing the accessibility and experiential quality of all institutions in the name of cultural understanding and education. www.timelooper.com