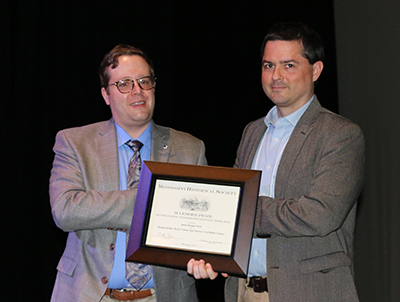 The Mississippi Historical Society held its annual meeting March 2–4 in Gulfport to honor its 2017 award winners and to commemorate the state’s 200th birthday. The society’s award for the best Mississippi history book of 2016 went to Jason Morgan Ward, professor of history at Mississippi State University, for Hanging Bridge: Racial Violence and America’s Civil Rights Century.

“Although deeply rooted in a remote corner of an isolated county, Ward’s erudite book has broad implications for our understanding of the Freedom Struggle,” said Max Grivno, University of Southern Mississippi history professor and chair of the McLemore Prize committee. “Hanging Bridge opens new windows onto the contours and parameters of the Freedom Struggle, and suggests that memory and place were, and are, inextricably tied to the Civil Rights movement.”

The 2017 B.L.C. Wailes Award for national distinction in the field of history was presented to Robert S. McElvaine. McElvaine is Elizabeth Chisholm Professor of Arts and Letters at Millsaps College in Jackson, where he has taught since 1973. McElvaine is the author of ten books, including Down and Out in the Great Depression, a New York Times bestseller, and Eve’s Seed: Biology, the Sexes, and the Course of History, which was nominated for a Pulitzer Prize in nonfiction. McElvaine has also written Franklin Delano Roosevelt, an exhaustive take on the life of the thirty-second president of the United States, and Mario Cuomo: A Biography. McElvaine is a recipient of the Richard Wright Award for Literary Excellence and has twice won the Distinguished Professor Award at Millsaps College. The Wailes Award is named for B. L. C. Wailes, the founder and first president of the Mississippi Historical Society.

Elbert R. Hilliard of Madison received the Dunbar Rowland Award for his lifelong contributions to the preservation, study, and interpretation of Mississippi history. In 1965, Hilliard joined the staff of the Mississippi Department of Archives and History as a curator at the State Historical Museum. In 1973, he was elected the fifth director of MDAH and served for thirty-one years. Hilliard’s achievements as director include strengthening Mississippi’s laws governing historic preservation, leading the effort to establish records management programs for state and local government records, supporting award-winning exhibits at the Old Capitol Museum, and spearheading funding efforts for the construction of the state-of-the-art William F. Winter Archives and History Building. Hilliard has served as the secretary-treasurer of the Mississippi Historical Society since 1973. Hilliard has also served as editor-in-chief emeritus of the Journal of Mississippi History and sits on the board of editors of the Heritage of Mississippi Series. Hilliard continues to serve MDAH as a volunteer, tallying more than 2,000 hours each year since his retirement in 2005.

Petal Middle School teacher Cathy Lee received the John K. Bettersworth Award, presented to an outstanding history teacher. Lee has taught for thirty years, but has taught U.S. history for only three years. Last year, Lee was selected to attend the C-SPAN Educator’s Conference to share her professional experiences with other teachers and to explore ways to bring primary resources into the classroom.

The Historical Society of Gulfport received the Frank E. Everett Award for its outstanding contributions to the preservation and interpretation of local history.

The Natchez National Historical Park received an award of merit for its exemplary research and production of the daily Natchez History Minute during the outstanding year-long Natchez Tricentennial celebration in 2016.

Walter Howell of Clinton and Jeanne Luckett of Jackson were re-elected as members of the society’s Board of Publications for 2017–20.