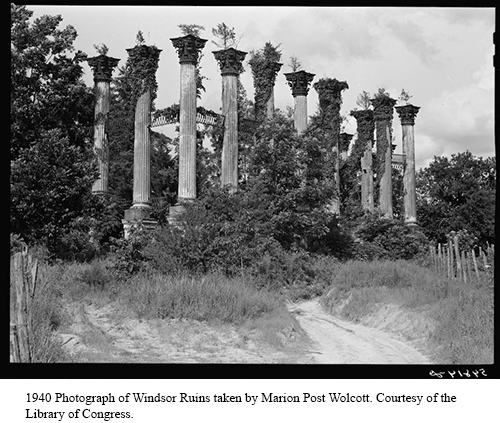 The Mississippi Department of Archives and History (MDAH) needs the public’s help to solve a mystery about one of the most iconic sites in the state. The department is seeking photographs of Windsor Ruins taken between 1942 and 1971 to determine when one of its masonry columns was lost.

Windsor Plantation was built for Smith Coffee Daniell II in 1861. One of the largest private residences in the state before the Civil War, the mansion featured twenty-nine Corinthian columns, each forty-five feet tall. In 1890, a fire destroyed the residence.

Today, only twenty-three full columns and five partial columns remain standing. It was believed that the missing columns were lost during the fire, but a 2017 study of the site conducted by architectural conservator George Fore has cast doubt on the claim.

“The report showed that three of the columns missing today were still standing as late as 1910,” said Mingo Tingle, chief of MDAH Technical Preservation Services. “We are trying to figure out when its seventeenth column was lost—it’s pictured in Eudora Welty’s 1942 photo of the ruins but missing in a National Park Service photograph taken in 1971. Having more pictures of Windsor Ruins from this period will help us solve this puzzle.”

If you have photos of Windsor Ruins taken between 1942 and 1971, email mtingle@mdah.ms.gov. Attach a detailed description with your submission.

Windsor Ruins was listed on the National Register of Historic Places in 1971, acquired by MDAH in 1974, and designated a Mississippi Landmark in 1985.

The Mississippi Department of Archives and History is the second-oldest state department of archives and history in the United States. A comprehensive historical agency, the department collects, preserves, and provides access to the archival resources of the state, administers various museums and historic sites, and oversees statewide programs for historic preservation, government records management, and publications. The department is headquartered in the William F. Winter Archives and History Building in Jackson. For more information call 601-576-6850.