Keenum Elected to MDAH Board 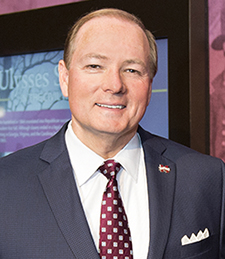 “Keenum’s work to bring the Ulysses S. Grant Presidential Library to Mississippi State University shows his commitment to supporting and making accessible historic resources—a commitment particularly significant to MDAH,” said Kane Ditto, president of the MDAH board of trustees. “He has been an outstanding steward of the historic structures on the campus of MSU. His experience as a university president and longtime public servant will serve the department well.”

Keenum was named the nineteenth president of Mississippi State University in 2009 after a long career in public service. His accomplishments at the university include increasing enrollment, expanding the campus through multiple construction projects, and acquiring the Frank and Virginia Williams Collection of Lincolniana—a vast collection of documents relating to the life and times of President Abraham Lincoln. Keenum has also expanded the MSU Promise Program, which provides need-based scholarship assistance to Mississippi students whose families have limited financial means.

Keenum succeeds Jack Garner, who retired after 19 years on the board as the senior member. During his tenure, Garner served as the vice-president of the board and as a member of the National Register Review Board. A Grenada native, Garner is the former president of the Ramey Agency, spent twenty-five years in banking, and led the effort to restore the First National Bank of Jackson building. When Garner was a board member of the Margaret Walker Center, he assisted in having Ayer Hall restored to house the research center. An accomplished artist, Garner’s work is included in many private and corporate collections as well as the Mississippi Museum of Art’s permanent collection.

“The department relied heavily on Jack Garner’s leadership in preservation projects across the state,” said Ditto. “He has provided stability on the board through the construction of the William F. Winter Archives and History Building, the restoration of the Old Capitol Museum, and the opening of the Museum of Mississippi History and Mississippi Civil Rights Museum—and has been instrumental in the success of each one of those.”

The Mississippi Department of Archives and History is the second-oldest state department of archives and history in the United States. The department collects, preserves, and provides access to the archival resources of the state, administers various museums and historic sites, and oversees statewide programs for historic preservation, state and local government records management, and publications.