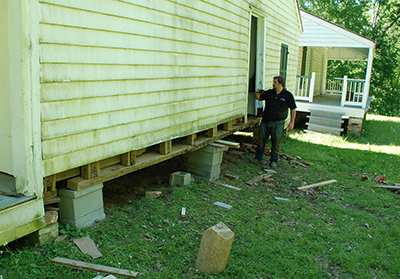 Thieves have vandalized the nearly two-hundred-year-old Shaifer House in Claiborne County, making off with four wooden support beams and damaging interior flooring and walls. The theft was discovered on April 1, and the actions most likely occurred earlier that week.

Staff from the Mississippi Department of Archives and History, which administers the site, have made an initial stabilization to prevent further damage to the house. Because permanent repairs have not yet been made, the site has been closed to the public. MDAH is working with public officials and private citizens to increase security at the Shaifer House.

“The repair of the Shaifer House is a top priority,” said MDAH director Katie Blount. “We are consulting with state legislators, local governments, the Port Gibson Heritage Trust, other state agencies, and the National Park Service to ensure the house is preserved for future generations.”

The Shaifer House was built by A.K. and Elizabeth Shaifer beginning in 1826. The house was the site of the opening shots of the Battle of Port Gibson. Fought on May 1, 1863, this significant battle was the first in General Ulysses S. Grant’s last—and successful—campaign to capture Vicksburg during the U.S. Civil War. The Port Gibson battlefield is a National Historic Landmark and the Shaifer House is a Mississippi Landmark.

The Shaifer House restoration project began in 2006 as a component of the TEA-21 Mississippi Civil War Trails Program. The restored house was dedicated in November 2007.

The Mississippi Department of Archives and History is the second-oldest state department of archives and history in the United States. The department collects, preserves, and provides access to the archival resources of the state, administers museums and historic sites, and oversees statewide programs for historic preservation, state and local government records management, and publications. The department is headquartered in the William F. Winter Archives and History Building, located on the corner of North and Amite Streets in downtown Jackson. For more information call 601-576-6850 or email info@mdah.ms.gov.