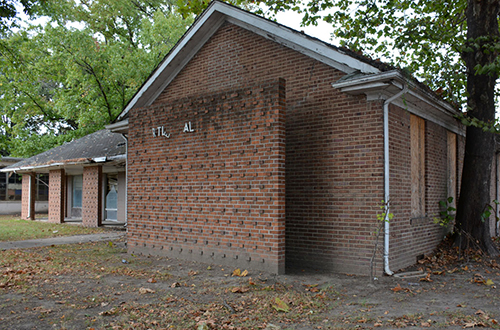 During most of the era of segregation, the Myrtle Hall Library for Negroes (pictured at right) was the only public library for African Americans in the Mississippi Delta. In 1929 a group of Clarksdale African Americans formed a committee, raised $1,000, and lobbied the city for a library to be built near the Myrtle Hall School—one of two African American schools in the city. The city of Clarksdale set aside $2,000 to construct the one-story building. Speakers at the library’s dedication in 1930 included L. J. Rowan, president of Alcorn College; B.A. Green, mayor of Mound Bayou; and William Holtzclaw, president of the Utica Normal and Industrial Institute. The Myrtle Hall Library was also the first home of the Delta Blues Museum.

Built in 1946, B'nai Israel Synagogue is located at the corner of Mamie Street and 12th Avenue South in Hattiesburg. Jewish immigrants first began arriving in Forrest County in the 1890s and first worshiped in the home of early Jewish settler Maurice Dreyfus. In 1900 the congregation occupied the top floor of the Odd Fellows Building in downtown. The congregation officially organized in 1915. It has been used continuously since construction by Congregation B’nai Israel.

Hattie Casey Elementary School was constructed as a white school in 1961 and named in honor of longtime Jackson educator Hattie M. Casey. The school was built in response to the tremendous increase in Jackson’s population after World War II along with new suburban development in northeast Jackson. The one-story school is a local example of Modernist or International style. Hattie Casey Elementary School is also an example of the cluster type of school architecture, which refers to concentrating the different functions of the school in certain parts of the building. The school is still in use.

Pearl Spann Elementary School was one of three white schools built with money from a 1956 bond referendum in response to Jackson’s rapidly growing population after World War II. The one-story, cluster-designed school was competed in 1958 at the start of the school year and named after a longtime Jackson educator, Susie Pearl Spann. Pearl Spann Elementary was designed in the Modernist or International style by architecture firm Overstreet, Ware, and Ware and still serves Jackson students.

National Register listing does not restrict a private owner's use of the property, unless development of the property involves federal funding, federal rehabilitation tax credits, or participation in some other federal program. There are no requirements for public accessibility, and information about sensitive sites can be restricted from the public.

The Department of Archives and History is the official State Historic Preservation Office in Mississippi and handles all requests for National Register information and assistance. Congress established the National Register of Historic Places in 1966 as a list of federally recognized properties especially worthy of protection and preservation. Mississippi has more than 1,200 National Register properties, including archaeological sites, battlefields, bridges, buildings, cemeteries, forts, houses, and historic districts. For more information call 601-576-6940 or visit www.mdah.ms.gov.