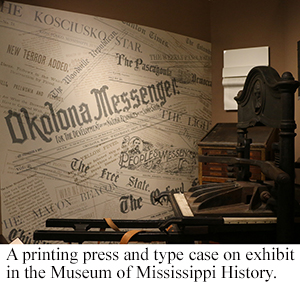 Researchers from around the world now have free online access to hundreds of Mississippi newspapers. The Mississippi Department of Archives and History (MDAH) participated in the National Digital Newspaper Program, a project funded by the National Endowment for the Humanities (NEH) to digitize newspapers across the country. The publications are accessible through the Library of Congress on its Chronicling America website, along with papers from other participating states.

“More than 238,000 pages of out-of-copyright Mississippi newspapers are currently online, with approximately 90,000 more pages expected to go online in the next six months,” said Mississippi Digital Newspaper Project coordinator Jo-Miles Seely. “This resource is for students, genealogists, local officials, journalists, documentary producers, and anyone who loves reading and learning about history.”

"Primary sources are key for students because it makes history relatable,” said Al Wheat, MDAH director of education and co-coordinator of Mississippi History Day. “Every year we send students to the National History Day competition, which offers two prizes to students who made use of Chronicling America in their research. Instead of simply reading about a historical event, students can learn from the people who experienced that event through this exceptional website.”

MDAH has the most extensive collection of Mississippi newspapers in the state, housing more than 13,000 microfilm rolls of papers in its archival collections. NEH provided funding for the Mississippi digitization project through three, two-year grants.

A number of issues published between 1923 and 1963 will go online within the next six months. Included are several African American newspapers: the Jackson Advocate, the Southern Advocate published in Mound Bayou, and the Weekly Echo published in Meridian. Two newspapers that will go online won the Pulitzer Prize for Editorial Writing: the Lexington Advertiser edited by Hazel Brannon Smith and the Chronicle edited by Ira Harkey, Jr.