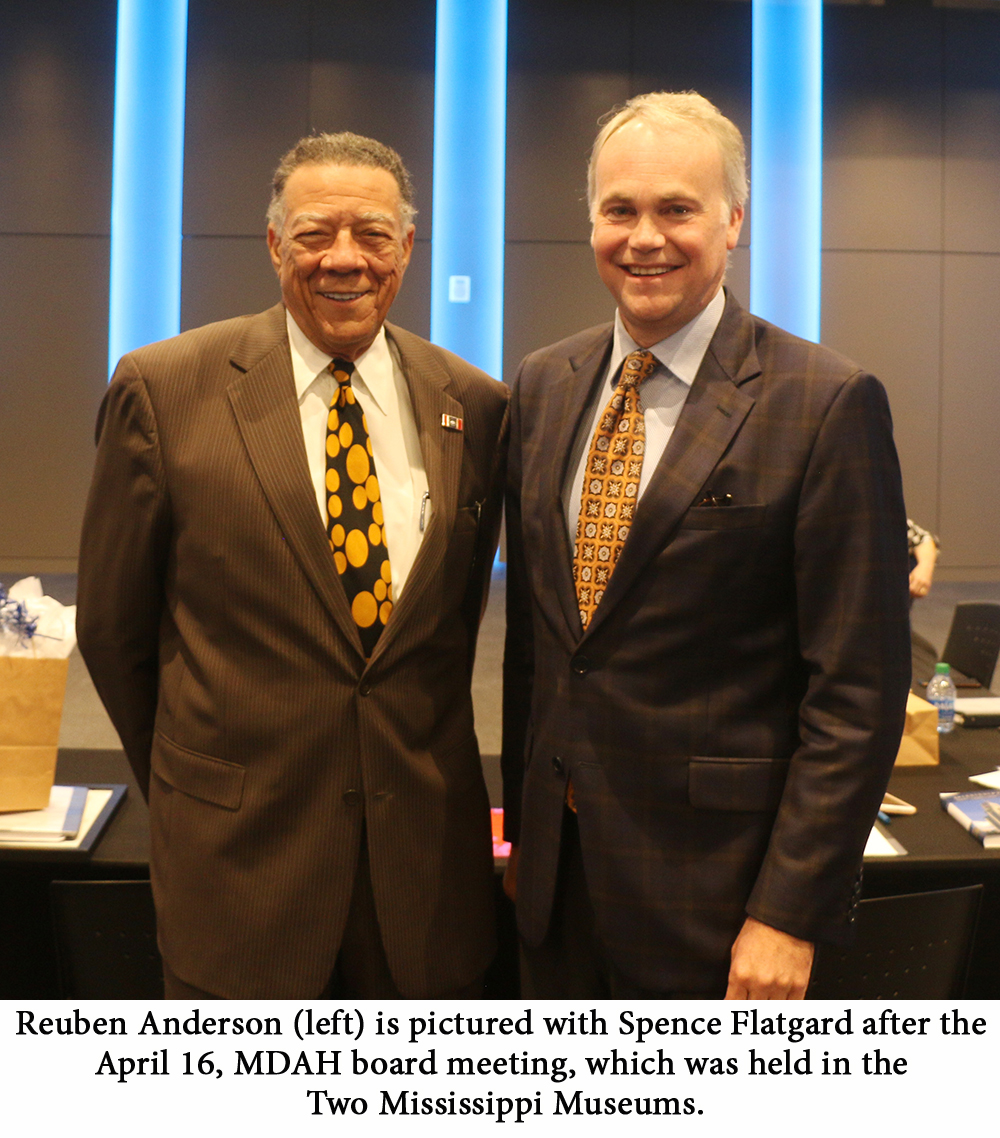 At a regular meeting of the Board of Trustees of the Mississippi Department of Archives and History (MDAH) on Friday, April 16, Reuben Anderson announced his plans to retire in July. Spence Flatgard of Ridgeland was elected to serve as board president beginning in October.

“Mississippi has been uplifted by Justice Anderson’s leadership, character and grace,” said Flatgard. “We all stand on his shoulders and those of former board presidents Mayor Kane Ditto and Governor William Winter. We invite every Mississippian to visit our world-class museums and compelling sites throughout our state to reflect on our rich history and look ahead to our bright future together.”

Anderson was instrumental in the creation of the Museum of Mississippi History and Mississippi Civil Rights Museum, helping to raise $20 million for its construction. Most recently, Anderson served as chair of the Commission to Redesign the Mississippi State Flag, which recommended a new design to represent the state. On November 3, 2020, Mississippians voted overwhelmingly to approve the design.

“Reuben Anderson has made history all his life, and he did no less at MDAH,” said MDAH director Katie Blount. “From the beginning, he shared Governor Winter's vision for the Two Mississippi Museums, and his strong public advocacy ensured the project's success. With strength and moral clarity, he led Mississippi in choosing a new flag that elevates our state and unites our people. I speak for all the staff as I say that we are honored by his leadership and proud of what we have accomplished together.”

Anderson said, “I am proud to be succeeded by Spence Flatgard, who will be a strong leader for MDAH, drawing on his thorough understanding of the agency’s work and his broad network of contacts both in the public and private sector. Like Kane Ditto and myself, Spence is a great admirer of Governor William Winter and shares his conviction that we cannot move forward together without a shared understanding of our history. Spence will lead this outstanding board with character and commitment, and I look forward to watching MDAH flourish in the coming years.”

Flatgard began his career as Senator Roger Wicker’s first Legislative Director and has served as State Bond Attorney for both Governors Barbour & Bryant. He is now a government affairs attorney and partner at Watkins & Eager, PLLC, located two blocks from the Two Mississippi Museums. He and his wife Lou Ann cheer for their daughter Andie’s basketball teams as their family pastime.

Blount said, “Spence brings a wide range of skills and professional experience to MDAH. He is passionate about the work we do and has built strong relationships with the staff. We look forward to continuing to expand our audience and strengthen our impact under his leadership.”

Christmas by Candlelight Tour Returns December 3 in Partnership with Capital City Lights, MDAH Partners with City of Jackson for Bicentennial